Home Profile Subscribe
Pseudotumor Cerebri: Getting the Diagnosis Right
When It Seems Too Good to Be True: May 2010 Migraine & Headache Blog Carnival

When a Migraine Treatment Seems Too Good to Be True 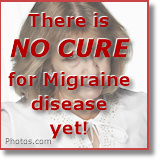 We've all seen them. Those sites or ads on the Internet that claim to be have THE answer to our Migraines... the promises of a "cure"... the promises of stopping Migraines "forever." We want to believe them. Some people are so desperate that they fall for the pitch and buy the product, the book, the e-book, and so on.

Don't. Yes, it's that simple. Don't fall for it. Save your money and your hope for real advice and treatments that stand a chance of working. Don't let the charlatans profit from our misery and our desperation.

Why do people make these claims and offer false hope? There are a number of reasons:

There's another scheme that runs rampant online too. It's the people who go around putting together Migraine information from a variety of sources, put it all together in a e-book, then sell it at outrageous prices to people trying to educate and help themselves. Don't fall for it. If the information in their little e-books were worth anything, they'd be able to sell it to a publisher and put out a legitimate book. The best example of this that I can think of is The Migraine Relief Guide. It's no longer even being sold by the deluded woman who put it together. Someone else bought it, and now they're offering affiliate deals where you can set up your own web site, sell it, and split the profits with the person who bought it from the original person. They're charging $27.00 for information that can be found on the Internet FREE. All they've done is put it together in one pdf document. Some of it's accurate information, some of it isn't. If you want to know more about this particular e-book, you can read my review. Yes, I bought it. I wanted to read and debunk it. And, I took advantage of their money-back guarantee and demanded a refund. Thankfully, I paid for it via PayPal. I had to file a complaint with them to get my refund.

The bottom line is that Migraine is a genetic neurological disease for which, at this time, there is no cure. Period. There are some excellent preventive agents that are the next best thing to a cure. For example, I now often go two or three months between Migraines instead of having several a week, and this is due to my preventive regimen, not some Internet "entrepreneur" who came up with a "cure."

Here's the truth: There are brilliant doctors and researchers who have devoted their careers entirely to searching for both effective treatments and a cure for this disease. They've made significant progress, but they have found neither a single treatment that works for everyone nor a cure for the disease.

Whatever you see online (or elsewhere) that's claimed to be a cure isn't. If it were, we'd be seeing it in news headlines everywhere. The person who developed it would win a Nobel Prize.

Fall back on the old saying, "If it seems too good to be true, it probably is." If someone tells you they can cure your Migraines, run! Save your time, energy, money, and hope working on the best possible Migraine management regimen that you and your doctor can develop.

Posted on May 08, 2010 at 12:19 AM in Awareness and Advocacy, Commentary, Migraine Treatment, Questionable Web Sites | Permalink | 0 comments