He Said WHAT About Your Migraines? 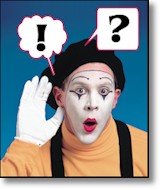 Today's Health Activist Writer's Month Challenge prompt is to write about the most ridiculous thing we've everheard about health or our condition, so for me, that means Migraine.

The problem with this challenge is that there have been too many of them. It was beyond diffiuclt to choose, but I did it. I chose this statement not only because it's so ridiculous, but because it has the potential to cause so much harm. This is a statement made to a Migraine patient who had been going tohim for just six months. Here it is...

"Sorry, but there's nothing more
that can be done for you."

What?! Are you freakin' kidding me? Anyone who knows me also knows what my response was to that. It was, "Fire his sorry butt!"

For those not familiar with Migraine disease and its treatment, let me elaborate about why that statement is so riduclous and why I say it's potentially harmful...

Obviously, that statement made me angry. I generally do try to be a bit more tacful when I speak about other people, but let's face it, this docto is an idiot. More than that, he's an uncaring, unfeeling idiot. If he doesn't care more than that for his patients, he has no business being a doctor. He gives other doctors a bad name. Shoot, he gives other human beings a bad name!

If a doctor has ever made that statement to your or implied as much, don't just walk away from him or her - RUN! Resist the temptation to smack the doctor silly. You don't want to get arrested, and you're a bigger person than that anyway. It's prefectly fine to tell him he's an idiot. In fact, I'd be hard pressed not to if a doctor ever said that to me.

But... know this... there are some fabulous doctors out there who won't give up on us unless we give up on them. They're intelligent, caring, passionate, and compasstionate professionals who truly care about us as patients and want to help us reduce the burden of Migraine disease and improve our quality of life. Don't let one idiot stop you from seeking good care from anotehr doctor. That would let the idiot win.

Finding effective Migraine treatment can take time and patience, but it can be done, and it's so very worth it. Look past the white coat to the person underneath. Find a doctor who cares and will work with you as a treatment partner.