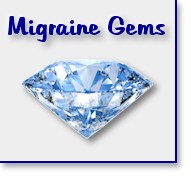 If vomiting during a Migraine attack makes you think your medications didn't "stay down," think again.

It's extremely important to talk with our doctors about our treatment plans and have his or her advice about what to do if that happens. Depending on a number of factors, a significant amount of medication can be absorbed into our systems in a very short time after swallowing them.

Even "safe" over-the-counter medications can cause serious, even fatal problems before we realize we've taken too much. It's an older case, but the memory of this one will always stick with me. In 2003, a 17-year-old girl turned to Tylenol for Migraine pain relief. Shortly after taking it, she vomited, so she took more. The Migraine and vomiting continued, and Kellie took 20 tablets in a 16-hour period. The last thing she said to her mother was:

"I thought it was OK, Mom. It was only Tylenol."

If you'd like to read more about this case and the letter I received from Kellie's mother, continue to A Mother's Plea: The Dangers of Acetaminophen Overdose."