Home Profile Subscribe
Migraine Clues - Is This a Migraine or a Headache?
Is the Iovera Device a New Migraine Treatment?

Winning Out Over Migraine - Do You Need a New Migratude? 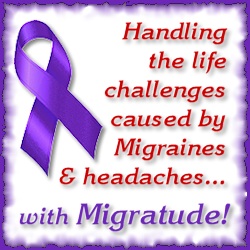 I "meet" many, many people with Migraine disease, both online and in person. There are wonderful opportunities to talk with other Migraineurs, and some of those I've met have become close friends for whom I'm very thankful.

There is, however, a huge mystery that I've encountered. Why are so many Migraineurs passive and seemingly apathetic about advocacy and awareness efforts. Why do so many hesitate to become proactive in their Migraine treatment?

We all need to vent about our Migraines sometimes. All of us. To me, venting about our Migraines is letting off steam about the issues we're having with managing our Migraines, with finding treatments that work, with finding a doctor who really understands how to treat Migraine, etc. That said, when a person "vents" over and over again without proactively searching for solutions, to me, that becomes whining. I'll listen to anyone vent as often as they need to IF they're continuing to look for solutions. Sometimes, it seems as if some people wouldn't get off their butts to do something for themselves if their butts were on fire.

Fifteen years ago, my Migraines were almost daily. They were also severe, and I had no treatments that worked for them. I lost my job because of them. I saw so many doctors in and withing about 150 miles of home that I've lost track of how many I saw. Medications? Tried a slew of them. Was still in bed with the Migraine from hell five or six days a week. I never actively tried to take my life, but there were plenty of nights when I didn't care if I woke the next morning or not. I might still be in that bed today - or worse, I might not be here at all - if I hadn't decided it was time to take charge and get help. Going to the Internet, I soon discovered that neurologists aren't necessarily Migraine specialists. That was a shock!

Then, someone online told me about a great Migraine specialist in Philadelphia. Whoa! Philadelphia is an eight-hour drive from here. Plus, our medical insurance wasn't going to pay all of the charges. My husband and I decided it was what we needed to do. We'd do away with cable TV, keep driving the old car that needed replaced, stop eating out, and do other things to save money for the medical bills. He would talk with his supervisor and arrange to take vacation days so he could take two days off for each of my appointments. In other words, we'd do whatever it took for me to get help.

The long drive, the expenses of gasoline, hotel rooms, and the medical bills not covered by insurance proved to be worth it! In six months, my Migraines were a bit better. Four and one-half years later, I was having only a couple of Migraines a month, and they were treatable.

Treatment plans don't work forever. There have been a couple of times when my preventive treatments stopped working, and my Migraines became chronic and debilitating again. Luckily, a Migraine specialist moved to West Virginia, so we can get to his office in only two hours. He won't give up on me, and I won't give up on him OR on myself. 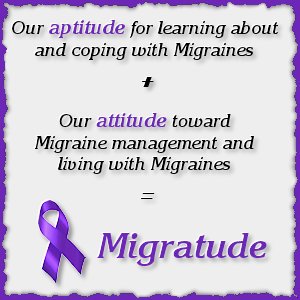 Do you find yourself saying any of these things:

Now, I'm not saying that nobody should ever say any of those things. However, in the  majority of cases where they've been said to me, the people saying them could have done something had they truly wanted to. Maybe some of these Migraineurs need a new Migratude?

So, What's Going On?

So, what's going on with these Migraineurs? There are so many preventive options that it would take longer than 25 years to give all of them a fair 90-day trial, so it's unlikely that they've truly "tried everything." Yes, it's difficult to travel to a specialist, but in most cases, it can be done. Financial issues are often the most difficult to overcome, but I've seen people say they can't afford to go to a specialist even though even their eight-year-old child has a cell phone, they eat out frequently, they have all the premium cable channels, they buy a new car every two years, they're designer clothing fashion plates, and so on. Seriously, I know these people.

Helping others with Migraine has become my passion because I know how difficult it can be to live with this disease. I understand how debilitating and isolating it can be. What I don't understand is those who whine - vent over and over, all the while doing nothing to help themselves. How can we help these people? I'm at a loss. If anyone knows, please let me know.

How's your Migratude? Think about it and check it. Having a good Migratude is one step toward better Migraine management.

A Headache and Migraine Organization
for Patient Empowerment

Posted on October 05, 2015 at 10:00 AM in Awareness and Advocacy, Chronic Migraine, Coping with Migraines, Migraine, Migraine Disease | Permalink | 0 comments