Home Profile Subscribe
Winning Out Over Migraine - Do You Need a New Migratude?
4th Migraine and Headache Patient Conference - Why Are You Waiting?

Is the Iovera Device a New Migraine Treatment? 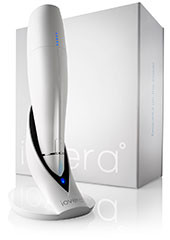 Recently, a fellow migraine patient sent me a message on Facebook to see what I knew about an article and video he'd seen about a new migraine treatment. I followed the link he provided to an ABC News site with an article and video entitled, "Stanford Doctors Freeze Migraine Pain." The caption under the video reads, "Dr. Elnar Ottestad, M.D., shares how he is using a device to freeze away migraine pain."

Intrigued and curious about why I hadn't heard about this before, I contacted Dr. Rob Cowan, director of the Stanford Headache Center. What he told me was as intriguing as the device used in the video. Here's what Dr. Cowan said:

"I must have had 100 calls on this! Iovera is simply a technique of freezing a peripheral nerve. We use it as an alternative to pulsed radiofrequency ablation in patients who respond to peripheral nerve blocks. It has NEVER been studied in Migraine. Dr. Ottestad was asked by the company that manufacturers it to demonstrate it for ABC news, and he agreed to do so. He was simply demonstrating it on a Stanford employee who gets headaches. ABC (and possibly Iovera) came up with the idea of calling it a Migraine treatment. Dr. Ottestad knew nothing about it. I started getting calls about ten minutes after it aired and, of course, had no idea what anyone was talking about, so I texted Dr. Ottestad, who also knew nothing about it (he hadn't seen the finished taping and narrative). Finally, Dr. Bob Shapiro (in Vermont!) sent me the link. I showed it to Dr. Ottestad and he was horrified and VERY apologetic. For the next week, I was answering inquiries from all over the world. It is finally settling down. Bottom line is that if your headaches (whatever kind) respond well to occipital nerve block (or any peripheral block), Iovera is a better and safer alternative to radiofrequency ablation. Please feel free to pass this story along. It will save me having to retell it over and over and over."

Here are some issues I have with this article and video:

Since Dr. Cowan told me, "Iovera is a better and safer alternative to radiofrequency ablation," I'm including the ABC7 video below. Please view it ONLY to see how the device works.

Dr. Ottestad, Ms. McQueen, and Stanford participated in this video in good faith simply to demonstrate a new device that is helping patients with a number of conditions. (ABC7 first covered the device when it was being used for knee and joint pain.)

I have no way of knowing what happened here - how a simple demonstration of a medical device turned into a video and article proclaiming it a new migraine treatment. Multiple possibilities come to mind, but since I wasn't there, I don't know if responsibility lies with Myoscience or ABC7.

However this happened, I would suggest viewing the video and article keeping in mind that the Iovera device has not been studied for migraine and that neither Ottestad nor McQueen intended to "endorse" the device for migraine. All of that said, it appears to be a treatment to be reasonably considered as an alternative to radiofrequency ablation for migraine patients who respond well to nerve blocks.