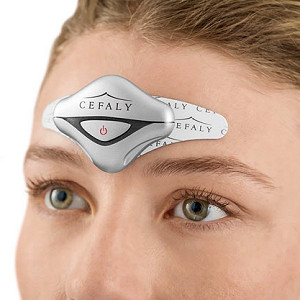 Cefaly Technology announced the release of the new Cefaly II for Migraine prevention today. The Cefaly II is a pocket-sized model of their FDA-approved Cefaly I. Here's the press release from Cefaly Technology:

NEW YORK, 18 July 2016 _ CEFALY Technology announced today that Cefaly®, the first FDA-approved external trigeminal nerve stimulation device for the prevention of frequent episodic migraine attacks, has undergone a massive makeover. Cefaly® I, which gained popularity for its unique headband-like shape, is now three-quarters its size, fits in the palm of your hand, is rechargeable, uses magnets to stay in place, and allows patients more control over the intensity of their daily session. The new Cefaly® II, is available exclusively in the United States; it will become available next in Europe in September.

“This compact device is so easy to tuck in a pocket or purse and I am hopeful it will further increase compliance and bring an even larger reduction in migraine attacks to patients,” said Dr. Pierre Rigaux, the chief executive officer of CEFALY Technology, and a member of the team that invented the device.  “Cefaly® I has a tremendous success record. In clinical trials 81% of compliant patients showed a significant reduction in migraine attacks and up to a 75% reduction in consumption of migraine medications. Now that the device is so small, it’s a big deal because patients can have their Cefaly® II with them wherever they go, which means they’ll be able to use it more readily, at their most convenient time.”

Cefaly® is an electronic, battery-powered, device that is placed on the forehead for 20-minutes once a day, using a self-adhesive electrode and a magnetic connection. The device sends tiny electrical impulses through the skin to desensitize the upper branches of the trigeminal nerve and reduce the frequency of migraine attacks. The new device allows patients to control their session by ramping up the intensity to their desired comfort level. Also, the introduction of a magnetic connection means the device will more quickly fall into place  – and more securely maintain its connection – rather than be affixed to a fastener where a small movement could occasionally interrupt the session.

Also new is a built-in rechargeable Lithium-ion Polymer 3.7 V battery that replaces the two AAA batteries, which contributed to the device’s shape and bulk. The new battery allows for the Cefaly® II to be charged either by a USB cable on a home or work computer, or through a wall charger.

The new pocket-sized Cefaly® II device includes a USB cable, wall charger, a storage case, and one electrode. Cefaly® II may be ordered online at www.cefaly.us. The device costs $349 and comes with a 60-day money back guarantee. A pack of three electrodes costs $25; each electrode may be re-used up to 20 times. Cefaly® II is available by prescription-only and indicated for patients 18 years of age and older. Women who are pregnant or could become pregnant should check with their doctor before using Cefaly®. In clinical trials, only 4.3% of people reported side effects -- all of which were minor and fully reversible.

CEFALY Technology is a Belgium-based company, with US offices based in Wilton, Connecticut, specializing in electronics for medical applications. It has developed external cranial stimulation technology for applications in the field of neurology; in particular for treating migraines. For more information, visit http://www.cefaly.us. Find Cefaly on Twitter: @Cefaly and on Facebook: http://www.facebook.com/CefalyEN.

My Migraine specialist prescribed the Cefaly I for me, and I used it faithfully every day for six months. Sadly, it didn't help me, BUT I know people for whom it has made an enormous difference by significantly reducing the frequency of their Migraines.

The Cefaly II appears to have wonderful improvements over the Cefaly I. It's obviously smaller and lighter, and the rechargeable battery should please Cefaly users. One thing to keep in mind is that the lithium battery means that you don't want to put this in a checked bag and get on a plane. Remember to treat it with the same respect you'd treat any other piece of electronics with a lithium battery.