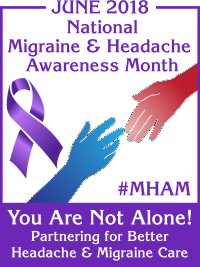 June is National Migraine and Headache Awareness Month, and there are a number of easy ways in which everyone can participate. Below are just two of the ways you can participate this year.

Anyone can submit a story through headachestory.com, either through words or video. The goal is to empower Migraine and Headache sufferers by showing them that they are not alone. Not only that, increasing awareness of the disease will lead to further research and treatments. 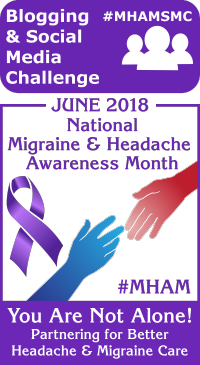 As in previous years, there are plenty of opportunities to spread awareness through blogging, tweeting, or posting on just about any social media platform. Each morning, we’ll post a new challenge on MigraineDisease.com. We’ve streamlined the process to make it easier for everyone.

There are three ways to participate:

It’s all up to you. Participate as much as you want, on as many days as you are able. There’s no penalty for skipping days. Self-care comes FIRST, especially during the 2018 #MHAM Social Media Challenge. If you'd like to receive an email with each day's challenge, you can register for that HERE.

These are just two of the activities for National Migraine and Headache Awareness Month. I hope you'll participate as much as you're able to. We can all stand to be reminded that You Are Not Alone!

Living with Migraine: We Must Stop Stigmatizing Each Other 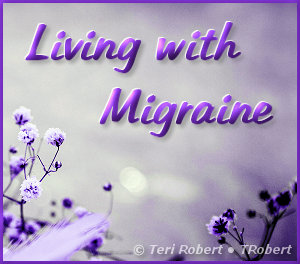 One of the best examples of people with Migraine stigmatizing each other occurs pretty much every time I see an online discussion about Excedrin Migraine or the commercials for Excedrin Migraine. Invariably, someone will say something along the lines of, "If Excedrin works for you, you don't really have Migraines."

Seriously? That's just not true for everyone. The truth is that we're all different, and our Migraines are different. Although Excedrin Migraine isn't any more helpful that breath mints for my Migraines and maybe yours as well, for some people, it's all they need. Some people have only a few Migraines a year, and they're very mild, but they still have Migraine disease and deserve our respect and support.

Another example is people saying that someone can't possibly be at their computers or using their phones to be online when they have a Migraine. Again, that's not true for everyone. Some people do experience photophobia (sensitivity to light) during a Migraine that's so severe that they need to retreat to a dark room. Others don't have that problem and may use the internet as a distraction to keep them occupied while they're waiting for their Migraine medications to work.

Finally, yesterday, I posted an article, Going to the ER for Migraine Is Not the Best Choice, to a Facebook group. In a nutshell, the article says that there are times when we'll all need to go to the ER, BUT it's not the best place for Migraine treatment. It also says that we should have a full treatment plan that includes preventive and abortive treatments as well as rescue treatments to use, when our first-line treatments fail, to try to keep us out of the ER. It also suggests talking with our doctors about when we should go to the ER. The response from some people was absolutely brutal. They said I didn't know what it was really like to live with Chronic Migraine, and said all kinds of other nasty things that I'm not going to repeat. You know what? I had lost my job and was confined to bed by Chronic Migraine before some of those people were born. They misinterpreted what I said, went on the attack, and stigmatized me. With people's emotions running high, I asked the other moderators of the group to handle the issue because I felt people didn't want to hear from me, but the damage was already done.

Sometimes, as was most likely the case with the article I posted, people are in pain, and they lash out. I get it. Still, would we like others to treat us in that fashion? I don't think so. We sometimes forget that posting to social media carries a responsibility, a responsibility to act in a courteous and civil manner. People are forgetting that. I have my own theory about one reason for that, but that's not our topic today. Here's a thought - If we're in pain or feeling especially vulnerable or emotional, maybe those are times when we shouldn't post to social media.

The bottom line is that we all want to see the social stigma associated with Migraine disease diminish and disappear. Right? There are advocates who dedicate their careers and lives to that purpose. BUT... It's not going to happen until we stop stigmatizing each other.