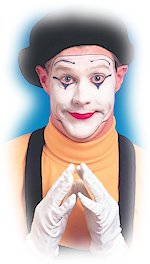 This post is for all of my Migraine and Headache family who have been so concerned about a certain He-Who-Must-Not-Be-Named who keeps tweeting nasties about me on Twitter.

Many of you have contacted me about a Tweet from June 15 that said,

"At first @trobert could have claimed innocence through #migraine ignorance. But not since MRI received this letter," followed by a link to an ebook entitled The Cliff's List Guide to Threesomes - Stories and Strategies.

The cover page also says, "from the Pages of the Seduction Community's Oldest and Most Respected Newsletter."

He-Who-Must-Not-Be-Named has an agenda. His father is a South African maxillo-facial and oral surgeon who has developed a surgical technique that he and his little boy claim can permanently stop Migraines and Cluster Headaches. They claim that almost every other doctor on the face of the planet is totally wrong about Migraine and other Headache Disorders, and woe be it to anyone who disagrees with them. So, for quite some time now, he's been Tweeting slurs, libelous comments, and defamatory attacks against me and some other patient educators and advocates. Since I work for a couple of sites that offer patients information and support at no charge by virtue of the advertising on those sites, this man and a-half team have declared that we're puppets of "big pharma." In fact, you may remember the post I wrote to tell my audience who I work for, who pays me, and who doesn't pay me - Migraines, Advocacy, and "Big Pharma."

Anyway, enough about He-Who-Must-Not-Be-Named. This is far more attention than he deserves. Really, I just wanted to tell those of you who are concerned about the Twitter attacks on me not to worry about it. He no longer bothers or offends me with his Tweets. Sometimes, when I bother to even read them, I get a good laugh out of them. The strange thing is that I even feel a bit sorry for this poor, pathetic soul. His Tweets have done him far more damage than anything he could ever say could do to me, and it takes a truly unhappy person to get so much satisfaction out of attacking other people. He and his Tweets aren't worth your time or mine - unless you need a good laugh. Engaging with him on Twitter only makes him Tweet more frequently and nastily, so you might want to resist "feeding the animals."

Some People Deserve to Experience a Migraine - Video 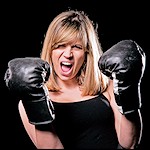 Good afternoon, my Migraine family and friends! I hope this day finds as many of you as possible free from pain and doing well.

There are more than 37 million of us in the United States alone who have Migraine disease. Many of us really struggle with Migraines. Approximately 3.2 million Americans have chronic Migraines, which means they have a Migraine or headache at least 15 days a month - or more often than not.

For many, many years, I believed and said that I wouldn't wish a Migraine on my worst enemy. Over the years, the unbelievably callous attitudes of people have changed my mind. There ARE people upon whom I'd wish a Migraine.

This afternoon, a Google alert caught my attention and led me to some of those people. The alert led to this video:

As the video went on, did you notice laughter in the background? Did you notice that the guy on the right was laughing so hard he could barely stand? What jerks! Have they ever felt a moment of pain in thier lives?

So, yes, I DO wish a Migraine on the people who created that video. What's more, I wish those who find it funny could experience just one severe Migraine so they'd know what we experience. I'd bet they wouldn't find it so damned funny any longer.

I don't get it. Is the world going to hell in a hand basked as the old expression goes or what? We have innocent people being gunned down in movie theaters and people who are so stupidly self centered that they can't recognize the pain and suffering of others. Obviously, I can't begin to address the problems of the world, but you can bet I'm going to stand up and object when I see such cruelty and stupidity show about Migraine and those who live with it!

Posted on September 02, 2012 at 01:24 PM in Awareness and Advocacy, Chronic Migraine, Migraine Disease, People Who Should Experience a Migraine, Video | Permalink | 0 comments